European meeting in the twin town

A detour to Zgorzelec should be part of the visit programme for all tourists to Görlitz. The smaller part of the city east of the Neisse River has belonged to Poland since 1945. The opportunity to stroll through two countries in one visit is not to be missed.

Jacob Böhme, the famous shoemaker and theosophist, lived in this house for eleven years (from 1599 to 1610). The building accommodates a small permanent exhibition about his life and work. Also the tourist information centre of Zgorzelec is located here.

The Dom Kultury in Zgorzelec

The former Upperlusatian Commemoration Hall was built between 1898 and 1902 to be a mighty symbol of the unification of Germany and Upper Lusatia. The Emperor-Friedrich-Museum (Kaiser-Friedrich-Museum) located here used to accommodate numerous collections. After the Second World War, the Museum was liquidated. Since 1948, the building has served as a house of culture.

The museum is dedicated to the history of Eastern Upper Lusatia focusing on Zgorzelec and its surroundings. You can have a look at the „Lusatian Room“, for example, showing items of daily use from the 18th and 19th centuries.

The STALAG VIII A Memorial

The former prisoner-of-war camp Stalag VIII A is located at the southeastern edge of Zgorzelec. 120, 000 prisoners were registered there between 1939 and 1945, among them the French composer Olivier Messiaen. During his imprisonment, he created his masterpiece “Quartet for the End of Time“, and performed it for the first time on January 15, 1941, in the camp. Today, the European Centre for Education and Culture commemorates the history of the camp and organizes concerts, for example at the Meetingpoint Music Messian.

Listen in and learn about the history of Stalag VIII A!

The audio guide will take you from station to station through the grounds of the former Stalag VIII A and familiarise you with the history of this place and the prisoners of war imprisoned here, as well as with Olivier Messaien's composition "Quartet on the End of Time", which was composed and premiered at this location in 1940/41.
You will hear facts about the structure and layout of the camp and reports about everyday life in the camp as well as individual fates of the prisoners of war.

The audio guide is available in German, Polish and English and is free of charge. All you have to do is scan the QR code on the card. You can get this card at the Görlitz Information Centre, among other places.

A mill, called the Dreiradenmühle or Krankenhausmühle, has existed here since the beginnings of the city. The large granary, built in 1938, stands out above all because of the large-scale bas-relief "WAZE", which was created as an artistic portrait of the united Europe in 1998 by the artists Vahan Bego and Michał Bulak. On the German side is the Vierradenmühle.

One city - two countries - one park

This is perhaps the shortest formula for the Brückenpark.

Brückenpark is the idea of everyday, shared life for people in Görlitz and Zgorzelec. A cross-border green connection of historical parks and newly developed public open spaces spans the Neisse River. A network of short paths and bridges is intended to open up the use of various urban offerings for everyone and facilitate encounters. 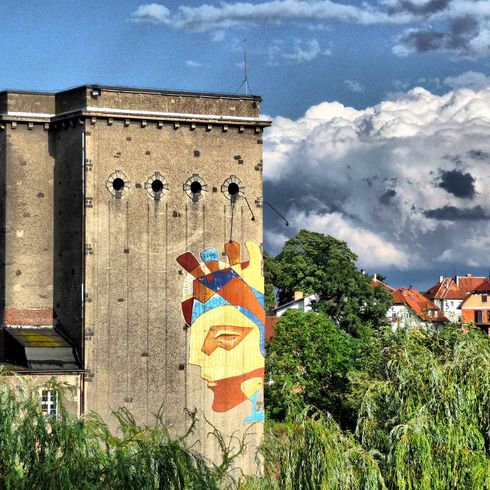 Learn more about Mobility in Zgorzelec