Inspired by Johann Wolfgang von Goethe‘s ballade “Der Zauberlehrling“ (The Scorcerer’s Apprentice), a fairy tale for German television was produced in spring 2017, inter alia in the Old Town of Görlitz, about the temptations of magic – with the famous broom playing an essential role. Further film recordings were made in the nearby castles of Tauchritz and Bad Muskau as well as in Kromlauer Park. For producer Ingelore König, the shooting was a matter truely dear to her heart, as she was born here.

Before “Der Zauberlehrling“ was shown as a Christmas film on German TV on Christmas Eve, the film celebrated its premiere on November 23rd, 2017, in the fully booked cinema auditorium number 1 in the Görlitz Filmpalast. The main actors of the film and various people contributing to this project and, of course, many youngsters and grown ups from Görlitz joined this event. After the premiere, many fairy tale fans took the chance to talk to the actors and the team or to take some photos together. On this occasion, the broom and the statue of the enchanted girl were presented to the city for the Görliwood collection.

Destitute Valentin wants to make his fortune in the city. Coincidentally, the Master Wizard of the country, Ambrosius, is looking for an apprentice, and Valentin is absolutely sure to be the right person to work for him. But when the examination takes place, clever competitor Katrina tricks on him. And so, willy-nilly, he takes a job at the chemist’s of Past Master Zacharias who has renounced any kind of magic and dedicates himself only to herbal medicine, very much to the annoyance of his diligent apprentice. When Valentin finds out that Ambrosius, possessed with power, frightens the whole city, the Past Master, after all, has to reactivate his magic power to avert the danger with the help of the apprentices. 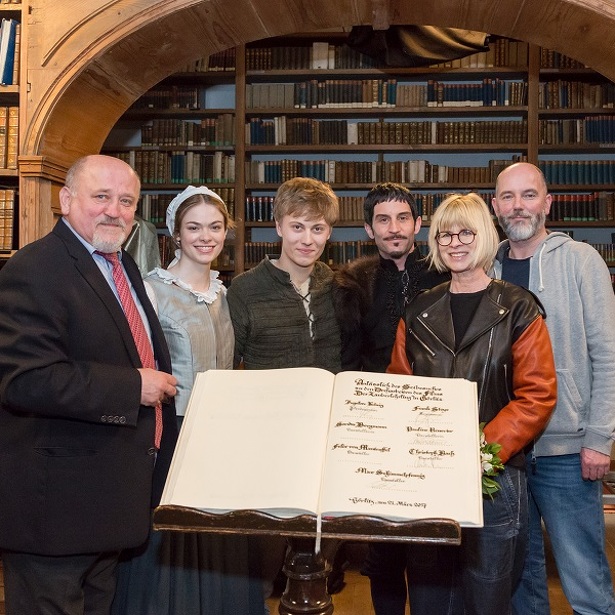