Enthroned above the Neisse River, St. Peter’s Church is said to be the landmark of the city. Visitors approaching the city from the East can enjoy an imposing view: the mighty eastern choir with its towering, 72m-long copper roof heralds the former strength and wealth of the city.

The five-aisled late-gothic hall church built between 1425 and 1497 is the biggest of its kind all over Saxony and shapes the cityscape like no other. The Baroque “Sun Organ” built by Eugenio Casparini, at that time a very famous organ builder living in Italy, is of particular importance. It dates back to 1703 and was reconstructed by Mathis Orgelbau AG between 1997 and 2006. Visitors are invited to enjoy regular public organ presentations, which are called “Orgel Punkt 12”.

The former abbey church belonged to the Franciscan monastery and was built between 1234 and 1245. It is located on the Upper Market (Obermarkt) and impresses visitors with its rich interior from different periods as well as numerous works of sacred art. One part of the church is planned to be restored and opened as a museum in the future.

The Jewish synagogue consecrated in 1911 was built by the architects William Lossow and Max Hans Kühne for the Jewish community in Görlitz, which had grown remarkably until that time. Being the only synagogue in Saxony remaining undestroyed during the pogrom night in 1938, it is a monument of national importance today. In 1991, the city started to restore the building, and it is expected to be re-opened as a cultural forum in 2019.

more information (in german only): http://www.synagoge-goerlitz.de/ 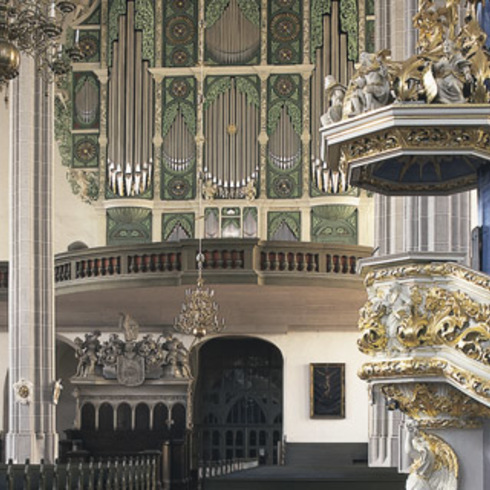